FusionCache is an easy to use, high performance and robust cache with an optional distributed 2nd layer and some advanced features.

It was born after years of dealing with all sorts of different types of caches: memory caching, distributed caching, http caching, CDNs, browser cache, offline cache, you name it. So I've tried to put together these experiences and came up with FusionCache.

It uses a memory cache (any impl of the standard IMemoryCache interface) as the primary backing store and optionally a distributed, 2nd level cache (any impl of the standard IDistributedCache interface) as a secondary backing store for better resilience and higher performance, for example in a multi-node scenario or to avoid the typical effects of a cold start (initial empty cache, maybe after a restart).

Optionally, it can also use a backplane: in a multi-node scenario this will send notifications to the other nodes to keep each node's memory cache perfectly synchronized, without any additional work. 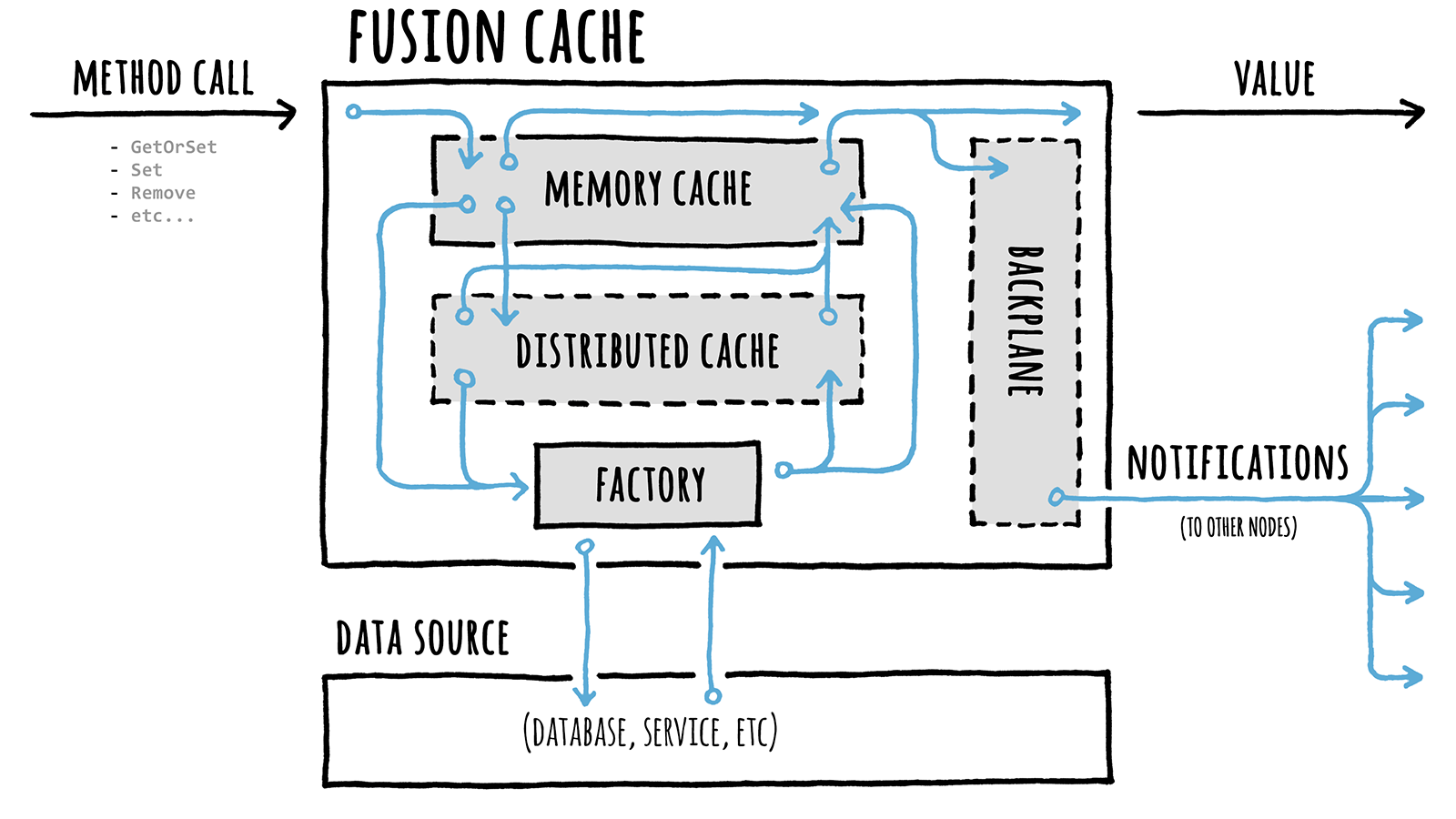 These are the key features of FusionCache:

As an example, imagine having a method that retrieves a product from your database:

💡 This is using the sync programming model, but it would be equally valid with the newer async one for even better performance.

To start using FusionCache the first thing is create a cache instance:

If instead you are using DI (Dependency Injection) use this:

We can also specify some global options, like a default FusionCacheEntryOptions object to serve as a default for each call we'll make, with a duration of 2 minutes and a Low priority:

Now, to get the product from the cache and, if not there, get it from the database in an optimized way and cache it for 30 sec simply do this:

A complete documentation, including examples and common use cases, is available at the official repo page on GitHub.

FusionCache targets .NET Standard 2.0 so any compatible .NET implementation is fine: this means .NET Framework (the old one), .NET Core 2+ and .NET 5/6+ (the new ones), Mono 5.4+ and more (see here for a complete rundown).

Showing the top 5 NuGet packages that depend on ZiggyCreatures.FusionCache:

Showing the top 1 popular GitHub repositories that depend on ZiggyCreatures.FusionCache:

- added support for adaptive caching
- added an optimization to use the FactorySoftTimeout as a LockTimeout in case a custom one has not been specified + fail-safe is enabled + there's a fallback entry, so that in certain situations there can be a perf boost
- added IFusionCache.HasDistributedCache prop to know if there is a distributed cache configured
- added a warning log in case there's a backplane configured without a distributed cache and DefaultEntryOptions.EnableBackplaneNotifications == true , since this can be dangerous
- more correct cache hit events in case of stale data
- better nullability decoration